China Rebuffs Biden And Back Putin’s Invasion Of Ukraine 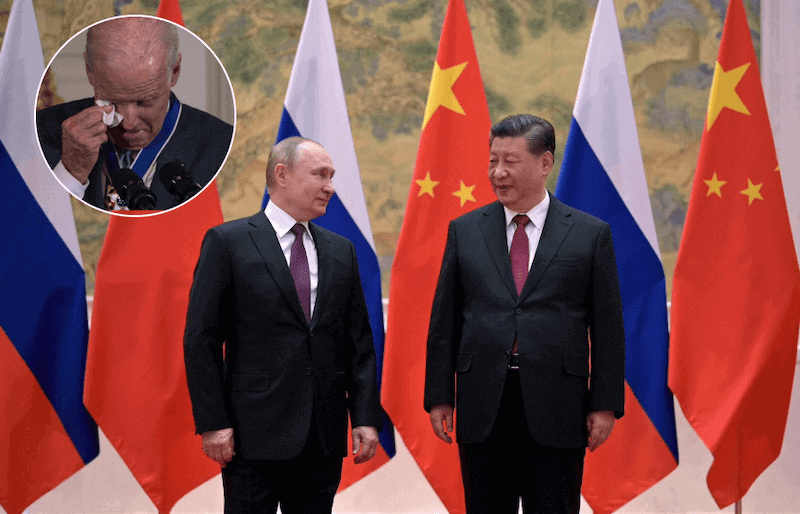 The more time that passes the more we learn about the mismanagement of the building crisis with Russia by the Biden Administration.
In the last week all we heard about was how Sanctions would be the preventative measure to stop Russia from invading. So they passed the Sanctions and put them in place.

Well, Russia invades almost the next day. And in the following DAYS, Biden was all over the place telling us that they never expected the sanctions to stop the invasion. As a matter of fact they need weeks to tell if the sanctions are even working in any measure.

If they needed weeks for the Sanctions to take effect, why not take steps to implement them months ago when they had time and were still saying that the sanctions would STOP in the invasion.

There is a near full on war happening now, in part, because on the failure of the United States to properly manage the situation.

Every diplomatic issue this president touches turns to dog sh!t.

If you’re left scratching your head wondering why, an article by The New York Times sheds some light on the incompitent approach the Biden Administration took in the 3 months leading up to the Ukraine invasion and also show the disrespect Russia and China have for Biden as well as the lack of understanding the Biden Administration has in this crisis.

Over three months, senior Biden administration officials held half a dozen urgent meetings with top Chinese officials in which the Americans presented intelligence showing Russia’s troop buildup around Ukraine and beseeched the Chinese to tell Russia not to invade, according to U.S. officials.

Each time, the Chinese officials, including the foreign minister and the ambassador to the United States, rebuffed the Americans, saying they did not think an invasion was in the works. After one diplomatic exchange in December, U.S. officials got intelligence showing Beijing had shared the information with Moscow, telling the Russians that the United States was trying to sow discord — and that China would not try to impede Russian plans and actions, the officials said.

The previously unreported talks between American and Chinese officials show how the Biden administration tried to use intelligence findings and diplomacy to persuade a superpower it views as a growing adversary to stop the invasion of Ukraine, and how that nation, led by President Xi Jinping, persistently sided with Russia even as the evidence of Moscow’s plans for a military offensive grew over the winter.

This account is based on interviews with senior administration officials with knowledge of the conversations who spoke on the condition of anonymity because of the sensitive nature of the diplomacy. The Chinese Embassy did not return requests for comment.

China is Russia’s most powerful partner, and the two nations have been strengthening their bond for many years across diplomatic, economic and military realms. Mr. Xi and President Vladimir V. Putin of Russia, two autocrats with some shared ideas about global power, had met 37 times as national leaders before this year. If any world leader could make Mr. Putin think twice about invading Ukraine, it was Mr. Xi, went the thinking of some U.S. officials.

But the diplomatic efforts failed, and Mr. Putin began a full-scale invasion of Ukraine on Thursday morning after recognizing two Russia-backed insurgent enclaves in the country’s east as independent states.

In a call on Friday, Mr. Putin told Mr. Xi that the United States and NATO had ignored Russia’s “reasonable” security concerns and had reneged on their commitments, according to a readout of the call released by the Chinese state news media. Mr. Xi reiterated China’s public position that it was important to respect the “legitimate security concerns” as well as the “sovereignty and territorial integrity” of all countries. Mr. Putin told Mr. Xi that Russia was willing to negotiate with Ukraine, and Mr. Xi said China supported any such move.

Some American officials say the ties between China and Russia appear stronger than at any time since the Cold War. The two now present themselves as an ideological front against the United States and its European and Asian allies, even as Mr. Putin carries out the invasion of Ukraine, whose sovereignty China has recognized for decades.
The growing alarm among American and European officials at the alignment between China and Russia has reached a new peak with the Ukraine crisis, exactly 50 years to the week after President Richard M. Nixon made a historic trip to China to restart diplomatic relations to make common cause in counterbalancing the Soviet Union. For 40 years after that, the relationship between the United States and China grew stronger, especially as lucrative trade ties developed, but then frayed due to mutual suspicions, intensifying strategic competition and antithetical ideas about power and governance.

In the recent private talks on Ukraine, American officials heard language from their Chinese counterparts that was consistent with harder lines the Chinese had been voicing in public, which showed that a more hostile attitude had become entrenched, according to the American accounts.
On Wednesday, after Mr. Putin ordered troops into eastern Ukraine but before its full invasion, Hua Chunying, a Foreign Ministry spokeswoman, said at a news conference in Beijing that the United States was “the culprit of current tensions surrounding Ukraine.”

“On the Ukraine issue, lately the U.S. has been sending weapons to Ukraine, heightening tensions, creating panic and even hyping up the possibility of warfare,” she said. “If someone keeps pouring oil on the flame while accusing others of not doing their best to put out the fire, such kind of behavior is clearly irresponsible and immoral.”

She added: “When the U.S. drove five waves of NATO expansion eastward all the way to Russia’s doorstep and deployed advanced offensive strategic weapons in breach of its assurances to Russia, did it ever think about the consequences of pushing a big country to the wall?” She has refused to call Russia’s assault an “invasion” when pressed by foreign journalists.

Get The Full Story At The New York Times