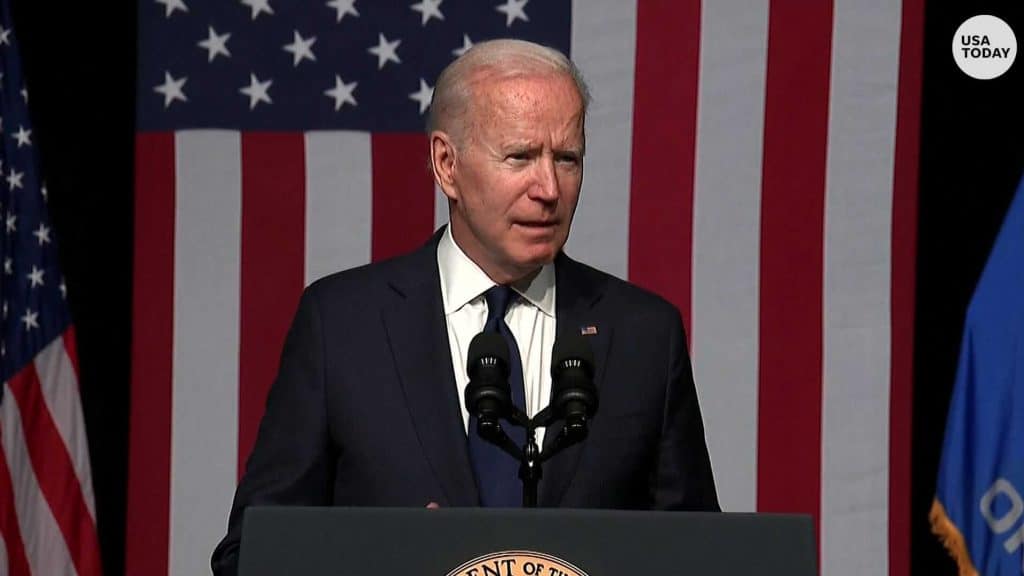 Like a child begging for a snow day the night before the big test, President Joe Biden and his team are working around the clock to shift the script for the State Of The Union Address to mainly focus on the Russian invasion of Ukraine.

His script writers can breathe a sigh of relief that they no longer have to try and sell the bag of crap that is Joe Biden’s first year in office.

They can leave all the disasters in the rear view mirror, like Afghanistan, The Economy, Inflation, the Broken Supply Chain, and even leave out the influence Biden had on the “Trucker Crackdown” in Canada that resulted in enacting War Time laws and seizing assets and bank accounts.

We can be sure he will talk up his racially selected nominee for SCOTUS and how selecting a person because of their sex and race first is good for the country.

But ultimately, he is going to take a big pass and focus on Russia, Putin, and Ukraine.

Will he discuss how his slow paced ramp up to sanctions might have actually caused the crisis that Ukraine is in?

By the time he delivers the SOTU, will the sanctions have deterred any further action? Or were they not intended to deter?

It’s so hard to remember what he said Sanctions were meant to do because he keeps changing what he said they would do.

I really hope that the people who elected President Biden are left scratching their heads as much as I am and are rethinking their decision and how they will act in the next elections.

President Biden’s team has revised his first State of the Union address to emphasize Russia’s unprovoked invasion of Ukraine as a major crisis facing the West, according to a person familiar with the text, shifting the tenor of a speech that his team had long hoped would launch a reset of his struggling administration.

While not a wholesale rewrite of the address, which will be delivered at 9 p.m. Eastern time Tuesday from the U.S. Capitol, the new version will reflect the way the crisis has added urgency to his longtime theme of defending democracies, according to one adviser, who spoke on the condition of anonymity to discuss private talks.

This new heavy dose of foreign policy is one of several ways the speech will depart from the typical State of the Union address, which modern presidents usually use to sell domestic ideas and exhibit sunny optimism. This year, Biden must also contend with a 40-year high in inflation — which he plans to address under the rubric of “lowering costs,” according to one person briefed on the address — along with voter angst driven by high crime and lingering coronavirus pandemic restrictions.

“This is a dicey one,” Christopher J. Dodd, former senator from Connecticut and a close Biden friend, said of Tuesday’s address. “He’ll appreciate that this is not the moment, given the events of the last few days alone — forget about covid and everything else — to go in and try ‘Happy Days Are Here Again.’ It would be a huge mistake.”

Analysis: Biden to shift focus of address to Ukraine

Some specific programs have been floated as part of early drafts, including a possible new push for sweeping legislation that would provide relief for military veterans suffering illnesses from burn pits, according to a person briefed on the speech. It’s an issue that’s deeply personal to Biden because his son Beau died of brain cancer after being housed near burn pits when he served in the military.

One early draft of the speech also included support for an effort to restrict members of Congress from trading individual stocks, according to a different person briefed on that part of speech.

White House officials cautioned late Sunday that the speech was still in flux and noted that elements and even major themes sometimes get dropped from the final version.

During Biden’s first speech to a joint session of Congress a year ago — which was not an official State of the Union address — lawmakers were prohibited from bringing guests because of the pandemic, a restriction that will be in force again Tuesday. Still, the audience will be significantly bigger than the 200 allowed last time in the House chamber.

Attendees are expected to include six of the nine Supreme Court justices, after only one was invited to attend last year’s speech. And about 20 Cabinet officials are scheduled to attend, according to a person involved with the planning who spoke on the condition of anonymity because they were not authorized to discuss the guest list. First lady Jill Biden’s box could include up to eight guests, the person said.